Want to be updated with latest news and events?

The National Service Assembly is the group conscience of Overeaters Anonymous Great Britain.  Every group and intergroup is entitled and encouraged to send a representative. 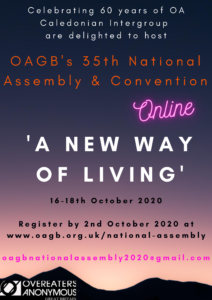 The 2020 Assembly was hosted virtually by the Caledonian Intergroup on 16-18 October 2020.

We look forward to seeing you in October 2021 in GLASGOW

The hosting intergroup for 2021 is Caledonian.

Did you know you can make suggested changes to OAGB bylaws and policies or submit resolutions?

Resolutions begin as ideas. If you’ve an idea of something you think OAGB should be doing, then as an individual, group or intergroup you can propose your idea in the form of a resolution – a clear instruction to the National Service Board of OAGB. Resolutions are then heard and decided on at National Assembly.

Individuals, groups and intergroups must submit suggested resolutions, bylaw and/or policy amendments in writing to the Secretary of the OAGB Board at least 10 weeks prior to National Assembly.

Suggested resolutions, bylaw and/or policy amendments will be first considered by a committee of the Board and the proposer, and redrafted if necessary in order to ensure that their wording is in keeping with the intentions of the individual, group or intergroup submitting them. Other members of your group or intergroup may be able to help you with writing one, please click here for the template and an example of a motion previously brought to Assembly.